Problem to Solve:  My company has a lot of Network Attached Storage (NAS) devices in the environment.   How can I best triage a performance throughput issues? 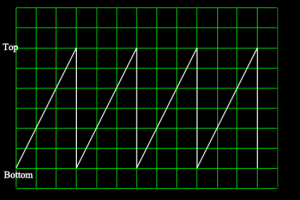 A vexed customer called me one afternoon for my advice on what he was sure was a network issue, but he was at his wit’s end figuring it out.   The facts of the case:

He had spent (who knows how much) time running iperf, which pushed a steady 900+ Mbps data stream between the two hosts.  And he had disabled Windows TCP auto-tuning settings, and tweaked a variety of settings between the NIC and Windows TCP stack, in the mistaken belief that these were to blame.  All to no avail; in fact, it served only to worsen the throughput overall.  He achieved best results simply putting Windows back to default.

But still, we continued to see the persistent saw-tooth graph.  And his conviction was that this was a ‘mysterious network’ issue.

The best place to begin for any performance triage exercise of this sort is to analyze the packet stream between the two hosts.  Thankfully, he had a packet capture appliance on the scene and we were able to perform some quick analysis on these voluminous 5 and 6GB file copies.

The analysis revealed zero window events occurring regularly through the transfer, from the NAS server to the Windows server.  And I was expecting this result given the utilization graph – the saw-tooth pattern is a telltale sign of this behavior.  The point of the trace was to verify that was happening.  There were no other issues seen: no retransmissions or duplicate ACKs, which are indicators of packet loss.

So what causes Zero Window Events?

A zero window, in this case, was the NAS server’s way of telling the Windows server, “Hey, I’m not keeping up with data flow here, please stop for a moment.”  So the question turned to why was the NAS server not keeping up?  Particularly over a Gigabit connection.  We should be able to push a steady Gigabit stream of data between the two, no sweat – particularly because these were new server-class machines with current OS’s and both on the same local Gigabit LAN.  And iperf proved this out also.

So I advised the next step of looking at CPU and memory resources on both hosts during a copy, which for me is a routine next step when I see zero windows.  Even so, I was skeptical this would reveal anything because the customer said they had a hardware RAID controller in the NAS, and we were merely copying a file and nothing else that should hit the CPU.  However, much to everyone’s surprise, including my own, the CPU on the NAS was pegged at 100% during the copy!  How could that be?  It got me asking questions about the NAS server including more details about the storage configuration.

Turns out, while they were using a SAS controller for the array, they configured it in JBOD mode (versus RAID mode) and were using ZFS, a sophisticated pooling and checksumming file system, to stripe data across the disks.  To add to it, ZFS supports full-time gzip compression, and they had enabled it.  (I’m making a very long story short with that sentence, but we did eventually learn about the gzip compression).

So we then had a pretty good idea about why CPU might be at 100%, but to test it out, we disabled compression.  Abracadabra!  No more zero windows and a nice steady 110-112MB/s in the Windows file copy graph (which is just shy of 900Mbps).  We re-enabled compression and the problem returned.  So compression was the culprit.  Coincidentally, using ZFS to stripe data instead of hardware RAID was ok; it kept up fine.

So the resolution was to 1 – live with it, 2 – disable compression, or 3 – throw more CPU at it to keep up with compression on the data flow.  A quick look at ZFS compression stats showed they were getting near-negligible benefit from the gzip compression anyway, so they chose to disable it.

This experience clued me in to the fact that zero windows can be an indicator of a storage issue.  Fundamentally, a zero window indicates that the host isn’t keeping up with the data flow (in other words, it’s a host issue, not a network issue) and storage configuration or malfunction can certainly be a reason for that.  In this case there was no malfunction; the NAS server was just compressing very large files as they copied over, and it couldn’t keep up with a Gigabit stream.

Things To Think About